Cold Lips are delighted to welcome writer, Jackie Faraday to the house… she got down to get up at London’s most exquisite of spaces, Somerset House, placed between the roar of the Thames, and the power of the Courts of Fleet Street, pulled here by none other than the queen of her own invention, Alison Goldfrapp… 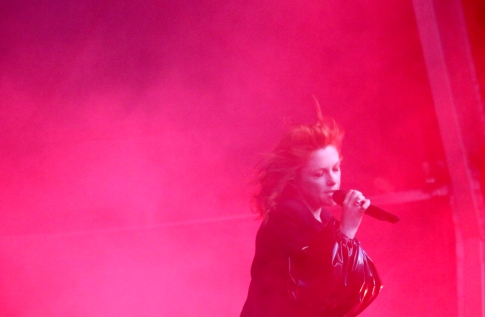 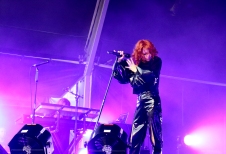 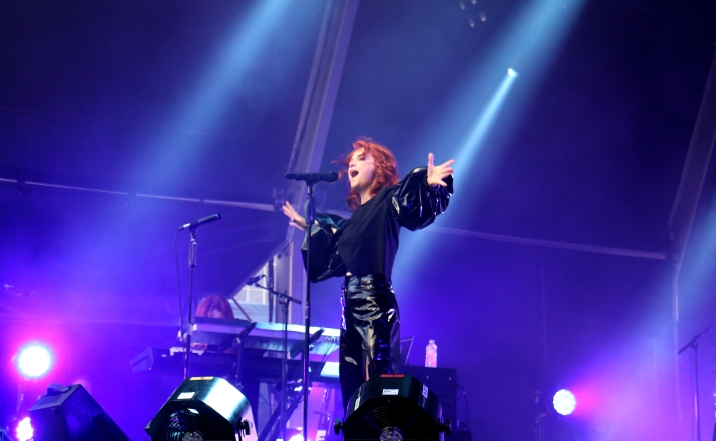 On a beautiful balmy London summer eve, we gather at Somerset House in anticipation of the enigma, the phenomenon and cool majesty of Alison Goldfrapp.

Waiting like devoted disciples for the high priestess to bless us with her electro cool – she does not disappoint…..

Bang on time, true pro, she emerges with her band in black PVC and puffball sleeves (possibly filled with candy floss) to perform a couple of somewhat perfunctory sound check-style versions of tracks from (my favourite Goldfrapp album) Felt Mountain.

Sound issues resolve and tribute to Felt Mountain over, Madame Goldfrapp and her minimal group launch in to later, more disco-meets-sex-robot-on-cocaine Goldfrapp albums and go on to rock the house with pristine Electro Rock Schlick.

An epic and complete set that salutes influences from Bowie (Ooh La La) to Suicide (Ride a White Horse) unfurls before us.

The stage set is minimal and rather uninspired, the Somerset House pleasantness makes the gig feel a bit like a private festival for the privileged, which slightly tames the rock n roll vibe that Goldfrapp exude in buckets on other occasions.

The gig is standing and yours truly is usually averse to such ( I have paid my dues standing wise at hundreds of mosh pits up an down the country and now prefer seated gigs). Though it’s not so bad today, there is swaying room for those who like to sway dance (and there are many a sway dancer in the crowd tonight!). Due to the average age of the audience ( about 75 years old : ))  everyone is rather polite and together in their absolute adoration of the band and really let’s face it of Alison Goldfrapp, who continually makes what are undoubtedly some of the best albums of our age with her brilliant partner Will Gregory.

Amazing sound, beautiful night sky over our heads, one of the greatest vocalists and some of the most brilliant original tracks ever created, only a fool would stop to consider the faults on a night like this and at such a gig as this.

All Hail the Queen – Alison Goldfrapp.  Beauty, Grace and Power with a voice like silk and gold, tonight you were ours and we were yours.

GOLDFRAPP appeared as part of the Summer Series at Somerset House.  Many events are sold out, but tickets still remain for the following:

These objects will be showcased alongside social documentary film and photography, from the likes of Shirley Baker, John Bulmer and Peter Mitchell.

The exhibition is presented in partnership with Liverpool’s Open Eye Gallery and supported by adidas.